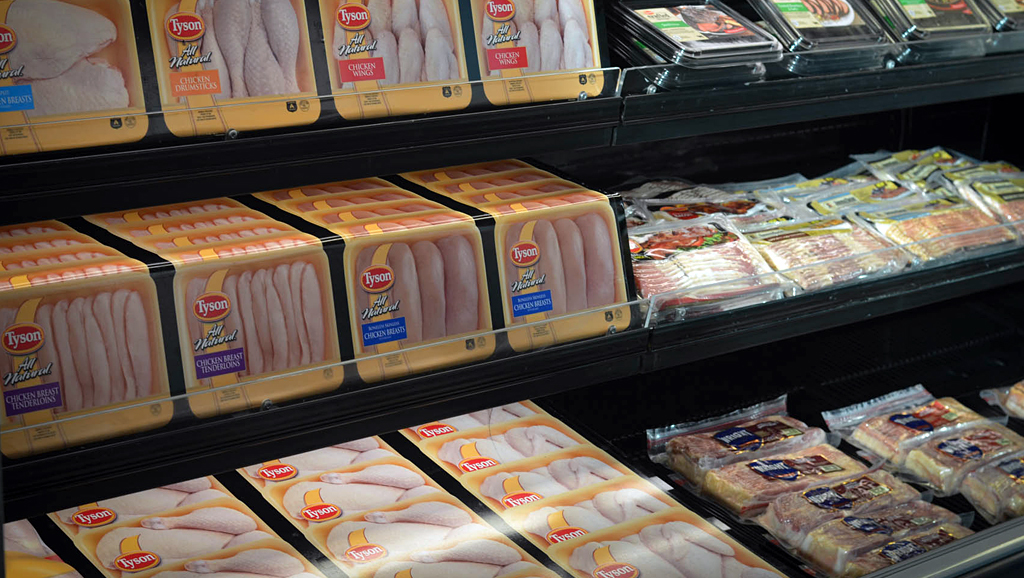 Lyle Nicholson, VP IS Manufacturing at Tyson Foods, is a man who lives out the company’s values at work as well as at home. His family represents the perfect picture of hospitality as they took us into their home while shadowing his work. One of Tyson’s slogans over the years has been ‘Feeding you like family’ and they mean it. We felt like winners at every chicken dinner. Although I soon found out Tyson Foods also contributed to our Wright Brand bacon, Jimmy Dean sausage breakfasts, Hillshire Farm lunchmeat, Sara Lee pies, and Ball Park hotdogs to name a few. I couldn’t seem to get enough of Tyson! What started out as my love for food grew into my love for Tyson as a company.

Mr. Nicholson showed us different departments of Tyson as well as gave us a personal tour of the headquarters. What I love about Tyson is they pay attention to the small details as well as the big picture- even in their decorating. The offices had subtle reinforcements of their brand throughout the building. Such as egg shaped doorknobs, an egg shaped table in the conference room, and egg cartons used as decoration behind the receptionists desk. There were also more obvious reinforcements in the beautiful art displayed by some of the top artists in the area. It was a nice opportunity to stop for a moment and appreciate what was around us.

“I have been here 25 years, I am not unusual. There are a many people just like me. People come here and stay here. It’s a great place to work.” ~ Lyle Nicholson

We were also shown the IS department where Mr. Nicholson works and sat in on some of his meetings. Most of the terminology used was over my head but one thing I did grasp is that the people in this department were an invaluable asset to the company. They not only have a deep understanding for the systems side of the company but they have a deep understanding for the business side of the company. I was extremely impressed by their knowledge and time in helping me learn both sides of Tyson. One person even went so far as to email me the abbreviations for Systems Applications and Products (SAP) so I could understand their language.

One of the first people I met at the company was Donnie Smith, CEO of Tyson Foods. Right away I could tell there were no levels of hierarchy in the company. Everyone who walks through his doors is deeply cared for, regardless of your title. Even though Mr. Smith had a booked schedule, he welcomed us with a genuine smile and interest in our lives. We got on the topic of coming from Africa and he shared his personal interest in building chicken farms in the impoverished areas of the country. Tyson helped start a program called One Egg, which produces 2,200 eggs daily, provides jobs and income for the local residents that run it, and give a source of protein for young children attending the local child-care centers. Mr. Smith is not only is actively involved with the One Egg operations but he and his wife have taken it to the next level by forming a foundation to support existing egg-producing farms that have been helped by Tyson. As I asked him questions about the company I could tell he was just as passionate in his faith as he was in leading his business.

Tyson prides itself in providing about 100 chaplains at its facilities. They care for team members who are having difficulties with life events, such as the death of a loved one, divorce, separation from family, parenting problems, and other relationship problems as well as offer employees counseling, support, and encouragement at work. I was able to sit down with Mike Tarvin and hear about the role he plays in overseeing Tyson’s Chaplaincy Program. I was drawn to his ministry of availability to all team members and their families. Most companies’ policy is for you to check your faith and spirituality at the door when coming to work. Tyson has created a faith friendly environment, where everyone can bring the full person they are to work.

My time at Tyson left me hungry to learn more about their company and the incredible work they are doing in feeding families, the nation and the world with trusted food products.

“Tyson has been growing, it changes all the time, but the people stay the same.” ~ Lyle Nicholson

“We are always looking how we do things more cost efficient without sacrificing the quality of our food.” ~Lyle Nicholson

“When we buy companies we do the best of both. What are they doing that makes them special and what are we doing that makes us special? We try and capture both of those and retain it.” ~ Lyle Nicholson

“It doesn’t matter what you do for our company, every job is important and every person is valued. It’s our culture that makes us different. We truly care about each other.” ~Donnie Smith