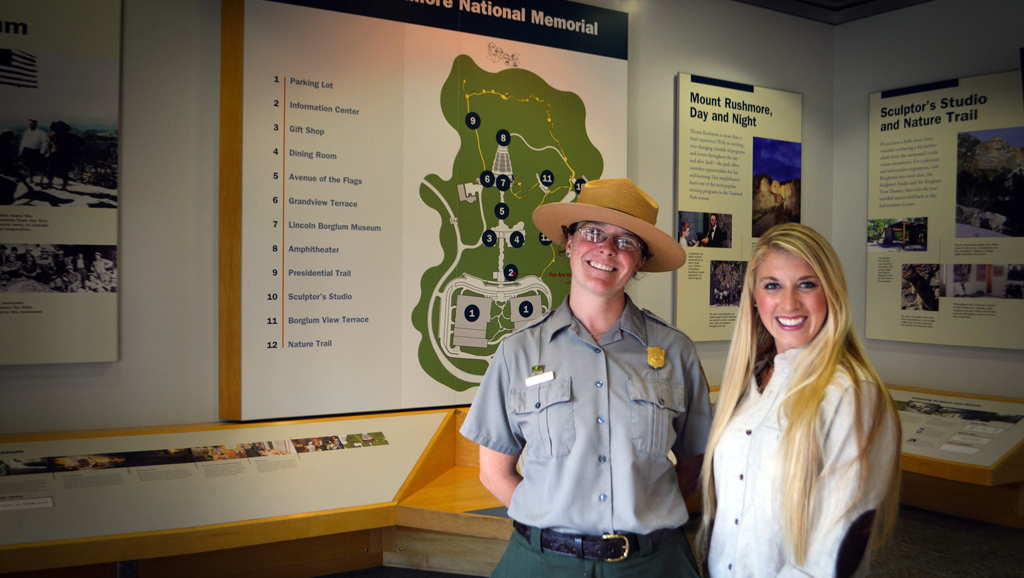 While in South Dakota, I had a rock-solid time shadowing Mount Rushmore Park Ranger, Adrienne Jaeger. She was first introduced to the towering mountains by her college sweetheart-turned-husband, Derrick Jaeger.  Since their first National Park roadtrip in 2012, their love has continued to grow, both for each other and the wildness of the outdoors. Together, they have visited 46 out of the 58 recognized national parks in the United States! Today, they continue to explore as many parks as possible while they celebrate the Centennial year of the National Park Service.

“Look for opportunities you never had the courage to explore.” ~ Adrienne Jaeger

Adrienne and her husband landed their jobs as Park Rangers at Mount Rushmore after much patience in applying for the position. One of the jobs perks is that they each get to craft their own Ranger Talks, which they use to inspire and teach people about the natural histories of the park. Ranger Talks occur on walks or throughout the day at the park. In Adrienne’s Ranger’s Choice talk, she chooses to focus on the art aspect of the mountain. In particular, she enjoys telling stories about the artistic career of  Mount Rushmore’s sculptor, Gutzon Borlgum, and reciting from texts written by each of the presidents on the mountain in hopes of inspiring park visitors. Derrick’s Ranger’s Choice centers more around the history and architecture of the land, providing information about the historic buildings that once stood in the Black Hills and how they were used by the 400 workers that helped create Mount Rushmore.

One of the most well-known monuments of this park is the Mount Rushmore National Memorial or “Shrine of Democracy.” I was able to stand face to face with four of our U.S. Presidents: George Washington, Thomas Jefferson, Theodore Roosevelt, and Abraham Lincoln, as I learned about the history of the monument. I had a new appreciation for the site after finding out that each face was partially chiseled by hand with hammer and chisels. It took 14 years to complete and cost $1 million to construct. Which today equals over $11 million!

Along with celebrating our forefathers at Mount Rushmore, we were also able to celebrate Adrienne Jaeger’s birthday as she let us shadow her as a Park Ranger. She showed her passion for her profession by ending the day honoring current and former military members when they lower the American flag and light up the sculpture at the evening program. That moment provided the biggest take away as I was filled with pride and appreciation for the people who have made our country a place where we can find freedom in doing work we truly love.

“Never give up on what you want to do in life.” ~ Adrienne Jaeger

“Life is too short to be doing things you don’t like all the time.” ~ Adrienne Jaeger

“Far and away the best prize that life has to offer is the chance to work hard at work worth doing.” ~ Theodore Roosevelt

“Always bear in mind that your own resolution to succeed is more important than any other.” ~ Abraham Lincoln