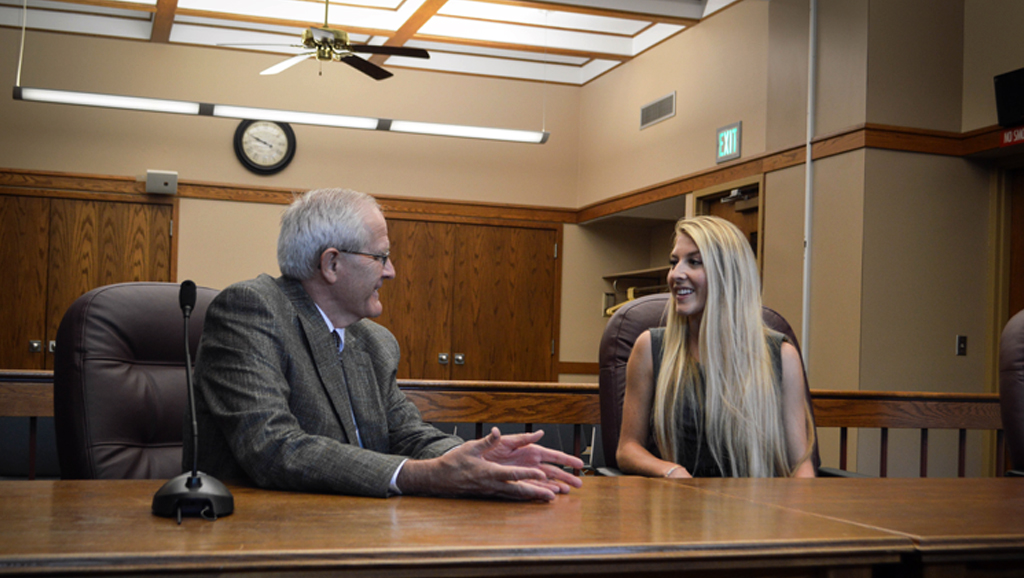 Not knowing what would be our next job to shadow in North Dakota, my brother and I decided to head to Theodore Roosevelt National Park. It was a name we were familiar with and thought the 26th president wouldn't mind us staying the night in his campgrounds. The next morning we were up early and off to find breakfast when we came across the heart of Billings County in the small town square. With a traditional courthouse illuminated in the middle of it I decided to check out my options for an interview. We went into the bricked courthouse to see whom we could meet and were lucky enough to get the opportunity to see how justice is served with District Judge Dann Greenwood.

“Too many people settle for a life that doesn't do them justice. Find something that fits your full potential.” ~ Dann Greenwood

Dann never gave much thought to doing anything else besides law. At a young age he developed a deep passion for the judiciary system as he watched his dad work as an attorney. It made sense, after receiving his law degree from the University of North Dakota, to come back to the small town he grew up in and work for his father. Since the town has a population of 783, lawyers with multiple skill sets are needed. That is, lawyers had to be familiar with all types of cases since there are not enough people in the county to be able to specialize in a particular branch of law.

With this extensive knowledge, Dann felt he had the capability to be a judge. When the previous judge did not run for reelection the position opened up for general election. Dann felt the candidates didn’t seem suitable so he took initiative to run himself. He was elected and now uses his 35 years of experience in all areas of law.

At college graduation you don a black robe with pride as you walk across the stage and receive a diploma. In the courtroom a judge’s black robe symbolizes the continuous learning that is required for the job. Many of us think of a judge as someone with gavel in hand, presiding over the courtroom. In reality though, the courtroom is only a small portion of a judges responsibility. A judge dedicates much time to staying current on the latest legal cases as well as learning new statute law and regulations.

As judge Dann has to identify the practice and procedures affecting civil disputes (contract, negligence, personal injury, property disputes, and civil injunctions) as well as family disputes (divorce, nullity, disputes over children and finances, and domestic violence). On top of that he may be asked, with hardly any notice, to deal with emergency situations such as domestic violence, rape, child abuse, or trespassing.

Dann approaches each verdict by applying not only the laws of the state but also the supreme law of the land, otherwise known as the US Constitution. Our system of government depends on the judicial branch to make it work. Now is a time where some people are reluctant to stand by those who enforce law and order. But if you get to know people like judge Greenwood they do their jobs because they truly care about the society they live in.

“Anyone who wants to be a judge should get in there early and get real experience before making the jump.” ~ Dann Greenwood

“No two days are the same - that's part of the excitement of the job.” ~ Dann Greenwood

“You hope people develop a respect for the judicial system because if people lose that respect than everything breaks down.” ~ Dann Greenwood