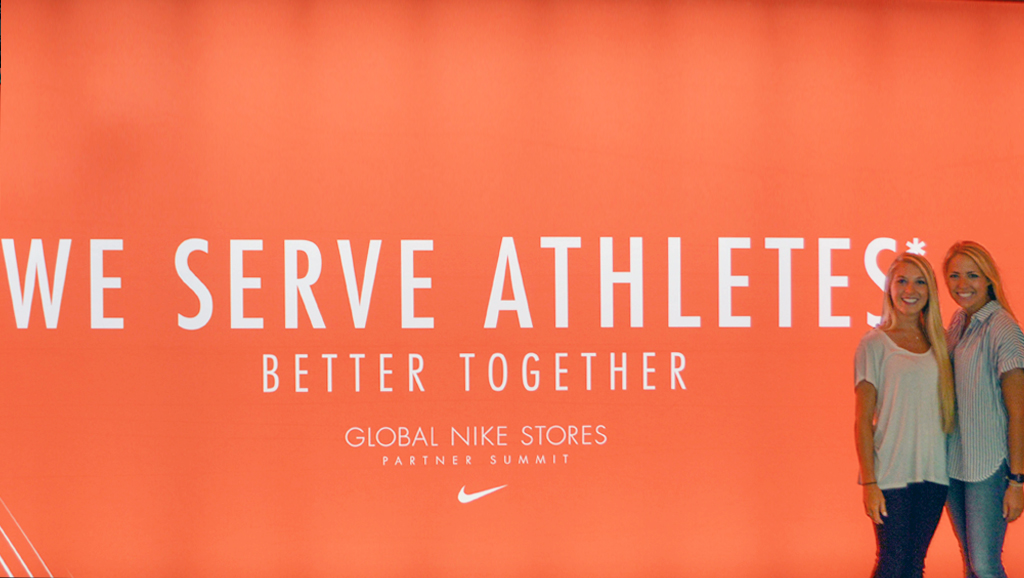 Nike. Just do it. I took their slogan and ran with it… all the way to Oregon. At Nike World Headquarters I had the opportunity to shadow the company’s Business Security Liaison Cassi Wika. Originally from a small town in North Dakota, Cassi came out to Portland, Oregon after graduating college and fell in love with the landscape. It was here that she found her dream job working for Nike.

Cassie was first hired as a contract project manager at Nike. During her time as a contractor she not only got her foot in the door but opened it wide enough to step through it. She landed the role of Business- Security Liasion after she met, networked, and impressed people with her work.

“I need to be learning and be challenged to feel like I’m actually succeeding in my career growth and my job. I don’t want to be bored ever. Nike will never bore you.” ~ Cassi Wika

Cassi currently acts as a liaison between certain lines of business that design shoes, create new platforms, and run events, which all need cyber security. She touches different areas of Nike as she brings experts in engineering, data analysis, and technologies to Nike. She teaches employees how to best use Nike’s secure technology and what they should consider putting in place for the future.

Cassi is not the only one whose drive and determination has landed them their dream job. While at Nike headquarters I got to sit down and talk to another employee, Russ Cartwright. Russ started out part time at a Nike factory store in Mississippi. He was set on working at the Nike World Headquarters as he applied for 52 jobs there. He got told “no” 51 times but that one “yes” made all the difference. He is an avid believer that “no” is not the end of anything but rather a catalyst to help you succeed. It served him as an opportunity to solicit feedback, learn from it, and work on how he could improve as a person. Russ lives out the Nike brand so much that he even got the iconic swoosh tattooed on the side of his foot.

While at Nike I realized the importance of teamwork as well as individual success. Nike is so large that no matter what your interests are in sports or work, it has the role and space in which you can achieve it. Employees may have different educational, work and geographical backgrounds, but the brand brings them together on the same team.

It facilitates this through allowing team bonding on their soccer fields, tennis courts, gyms, Olympic sized pools, running trails, rock climbing walls, volleyball courts, football field, and a putting green. It provides a work hard/ play hard environment where employees are constantly testing their mental and physical limits to be the best.

People who work at Nike leave no doubt that they deserve the position they hold. They continue to set the bar for all others to follow. The work ethic and determination each employee encompasses at Nike World Headquarters is truly inspiring. My time at Nike taught me that you should stop at nothing to achieve the work you love because after the final “no” there comes a “yes.”

Want to learn more about Nike as a company? Check out Shoe Dog by Nike’s Founder, Phil Knight.

“It’s all about your personal brand as much as the Nike brand.” ~Russ Cartwright

“The best quote I was ever told is ‘Failure is not the end, failure is merely part of the process.’” ~Russ Cartwright

“There is no finish line, the race is never over. We continue to amplify, elevate, and set the bar, to do it all over again. ” ~Russ Cartwright

“Nike empowers their people to make good decisions, to feel responsible for their work, and allows them flexibility to grow.” ~Cassi Wika

“Learn from every experience. Know what you’re good at and where can you add immediate value.” ~Cassi Wika