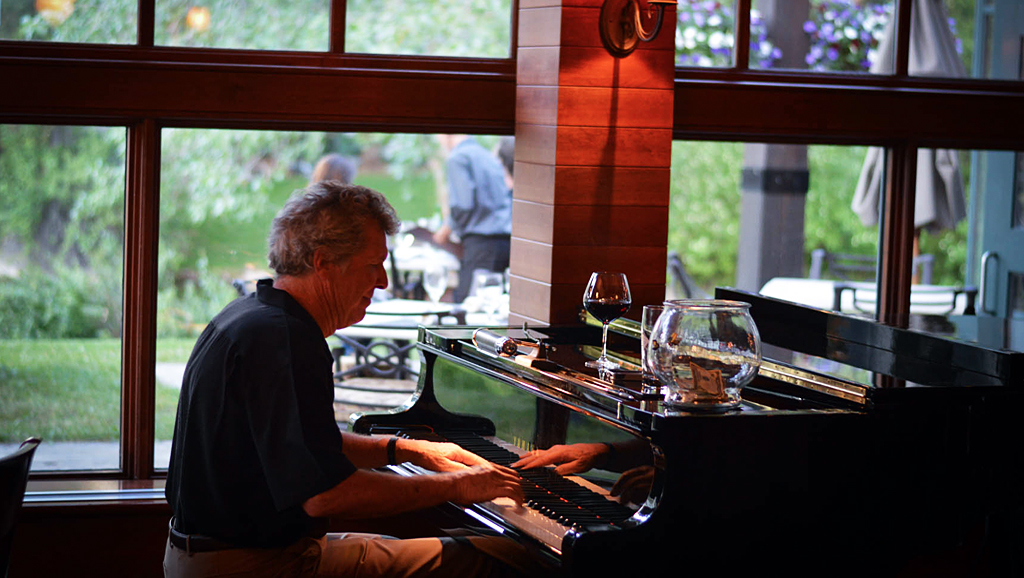 As soon as I walked into Vista restaurant in Arrowhead, Colorado, I started taking notes. The room was packed, the lights dim, the sun was setting, and the sound of music wrapped every separate experience into one big melody. By the window there was a man seated at a piano. The instrumentalist, Micky Poage, was stirring the emotions of each person in the room with each key stroke. He gave off a calm and composed vibe but played music that seemed to move the mountains outside.

While riding the chair lift up or skiing down, these are the same mountains that Micky composed many of his songs. He sneaks away from all the noise in his life to find silence on the slopes. It is in that silence that some of his greatest compositions are created. An example of this is his rendition of "The Last Run of the Day" which is a sweeping instrumental piece he envisioned while skiing down Gandy Dancer. Along with the fresh powder he makes a fresh sheet of music in his head. He then writes arrangements that challenge his technique on and off the slopes.

“It takes effort, it takes dedication, and it takes persistence. Persistence out weighs everything; if you are persistent and can handle failure you will be successful. Persistence is the key.” ~ Micky Poage

Micky was a child prodigy at the age of 3 and started playing professionally at the age of 14. At the age of 19 he already had a place where he played in Vail named after him. He drew large crowds to restaurants and nightclubs before he was old enough to legally be there. Although he was young at the time he has always embodied an old soul that related to his audience. Micky is an artist that has produced 3 original CD’s that have depth beyond my knowledge.

Through the years Micky has developed a diverse, loyal following that goes back over 40 years. It is at the point where even the grandchildren are coming to hear the magnificent music Micky plays. One child who used to come in to watch Micky was so enthralled by his music that he went on to become a conductor on Broadway. That is only one of many stories of how Micky’s music has moved people.

Micky not only gifts people with his music but he gifts them with his presence. He is constantly entertaining. If it is not at a restaurant, private party or on stage then it is on the slopes or golf course. During Colorado’s busy seasons, in winter and summer, you will find him skiing on the slopes or golfing on the green with people he has personally connected with in his audience. During the slow seasons people will fly him all around the world to perform for their private parties at places like the Hearst Castle or Orient Express.

I got to experience what it would look like to attend one of Micky’s intimate concerts. It was nothing short of exceptional. Like his music, Micky draws people in to every word he speaks. I quickly realized that if you are not friends with him when you arrive, you certainly will be when you leave. During his breaks from playing, he meets with each person individually who has come to hear him play. He greets them by name and picks up where their conversation had ended last.

After meeting with Micky, I have a greater appreciation of music and the personal side of his business. I saw the importance of making genuine connections with people. It can be as easy as inviting them to play a round of golf with you or maybe even go on a walk with you. What are ways in which we can make a conscious effort to hang out with people through welcoming them to join activities in our lives? This man, who started early, has left a legacy for others to follow. Keep reading to find out the keys to Micky Poage’s success.

“I like all kinds of music, that’s how I’ve survived in this industry, because I don’t get bored.” ~ Micky Poage

“This job here is as much PR as it is my ability to play the piano, it’s as much public relations, and you have to understand the business.”    ~ Micky Poage