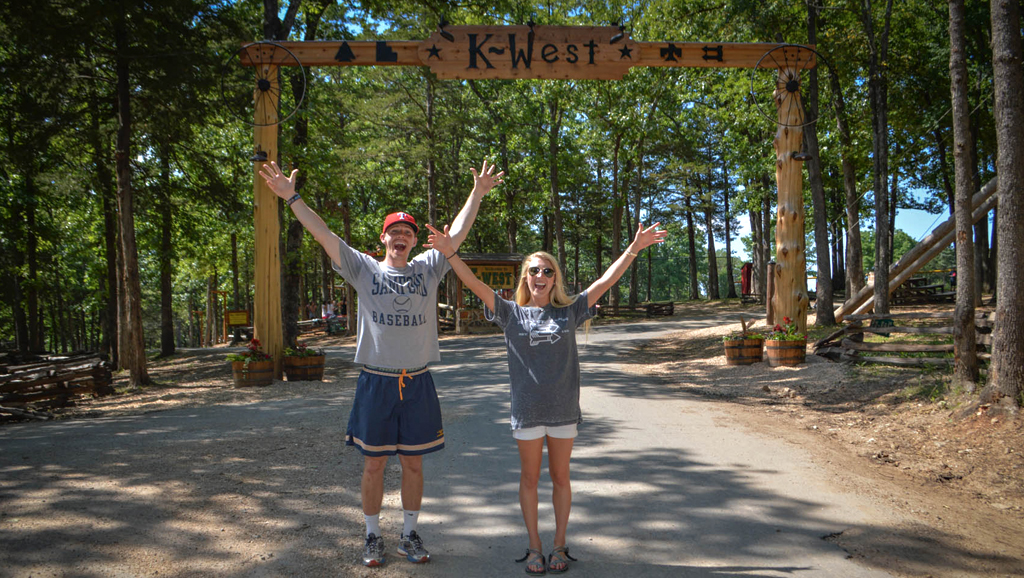 In the center of the United States, is Branson, Missouri, a "small" town of 10,000 people. Each year the town hosts nearly 8,000,000 visitors that come from all over the world to see the variety of shows and hear live music. While we didn’t get to tap our feet to the music, we did get the opportunity to visit a site that is also well known to families around the world, Kanakuk Kamps. This Christian summer camp started back in 1926 and has hosted youth aged from 6 to 18 for ninety years!

It was at Kanakuk Kamps that I got to shadow Kevin Smith, "AKA KSmitty", who is an assistant director at the K-West division of the camp. Here he focuses on middle school kids, aged between 12 to 14 and leads them through the most awkward, dorkiest, and moldable time of a child’s life - I know it was for me! Kanakuk's summer camp program is dedicated to developing dynamic Christian leaders through life-changing experiences, Godly relationships, and spiritual training. Kevin has a large role in ensuring that this mission is carried out. He does this through directly supervising, supporting, and mentoring the leadership teams, counselors, and campers, all while acting goofy and telling people about Jesus.

“Live your life in the middle school mindset. Act a fool! As if no one is watching. Be weird. It's more fun.” ~ KSmitty

After being with Kevin for just a few minutes we entered into a conversation I haven’t even had with some of my closest friends. He is a brother, an includer, grace-covered and big-hearted. He creates fun and memories in a place where there is no TV, no cellphones, and no service. Ironically though, it was in a place of service where he found God's calling.

A couple of years ago, in the very early morning Kevin was stuck in the Waco Regional airport after discovering his flight to Kansas City had been canceled due to bad weather. He was supposed to fly there to sign the final papers, committing to a high paying sales job and a new state. A man named Robert Pearson saw the frustrated look on Kevin’s face and said, “Hey, you need your shoes shined?” Kevin kind of laughed and replied, “Sure man. Why not? But I don’t have any money.” Robert pointed to the chair and said, “Just have a seat.” They got to talking and Robert asked where Kevin was going? When he told him Kansas City Robert’s response was, “You sure?” Kevin told him about the job offer but Robert argued that maybe he wasn’t supposed to go. Frustrated Kevin said he was going to reschedule his flight and begin his new career to which Robert calmly replied, “No, you’re supposed to do ministry.” Kevin ended up going home and the next day K-Life called to offer him a job. He took it.

Two years ago Kevin went back to Waco and found himself stuck in the same airport. He went to see if the Shoe Shine Man was still there and sure enough he was! Not only that but he remembered Kevin and their conversation all those years ago. Kevin couldn't believe it but went on to tell Robert about the ministry he was doing at Kanakuk Kamps and how Robert was a part of that vision. Kevin shared with us how Robert Pearson embodies the qalitites of a faithful and obeident servant of God. He shows up everyday to work to shine shoes and preach the gospel. All the while wearing a hat that reads, “Robert Pearson At Your Service.”

The passion Kevin possesses for the Lord radiates within him and touches the hearts of others in ways that he is completely unaware. It was incredible to see the way he interacted with everyone around him, drawing each person into the Kanakuk family. Camp is a place where you can act silly, be vulnerable, share stories, and meet your best friends. As we left Kanakuk Kamps I can't help but think that this instance was no different.

How to Serve Others:

“Discipleship is me, being an idiot longer than you have. So learn from my mistakes.” ~KSmitty

“A guy once asked me, ‘Kevin what makes you pound the table? What really gets you going?’ Right now for me it’s discipleship.” ~KSmitty

“I see too many of my friends that are at office jobs and hate it, and their lives are consumed. I get to do what I love.” ~KSmitty

“I’m passionate about my job. I might not make 6 figures but I get to do what I love.” ~KSmitty

“The fun thing about camp is you get to come and be yourself and act goofy.” ~ KSmitty