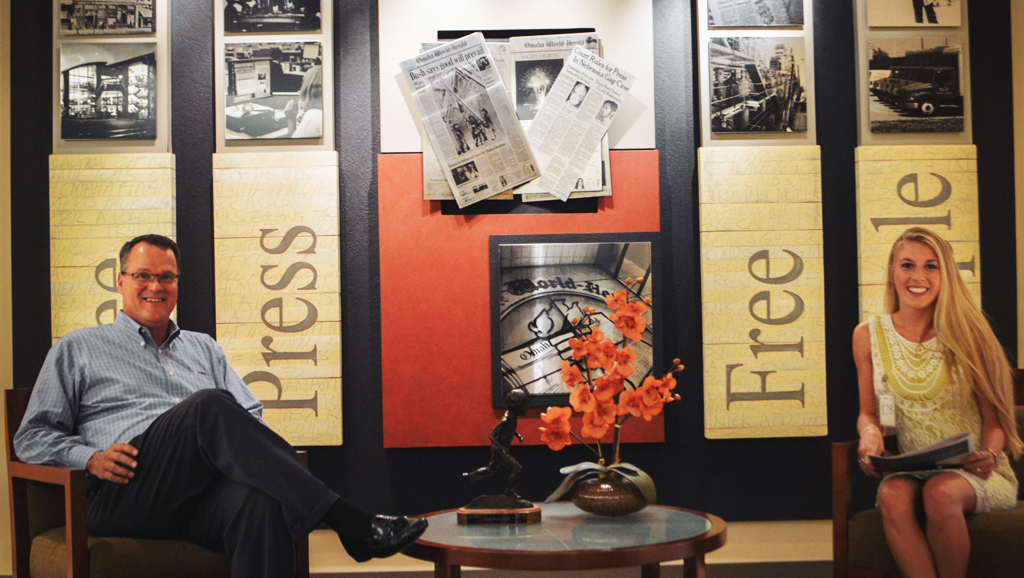 Joel Long lives in Omaha, Nebraska, which gives its visitors the amenities of a big city and the warmth of a small town. I felt welcomed right away as Joel invited me into his home and gave me an inside look at his job. As Director of Public Relations for the largest newspaper in Nebraska, Omaha World-Herald, he helps readers become involved in the community around them.

Before working at Omaha World-Herald, Joel attended the University of Nebraska. While there he was the president of the SAE fraternity and in constant communication with Terry Kroeger, the president of the Sigma Chi Fraternity. What began as fraternity bantering and shooting bottle rockets at each other turned into a lifelong friendship. It was this friendship that helped Joel land a job! When Joel was about to move states for work, Terry offered him a job at Omaha-World Herald in order to have him stay a Nebraskan. He started as accounting manager due to his finance degree but moved to public relations. He found involvement in community service a much better fit for his passions and skill set.

“Do a job that excites you. It’s a long day if you don’t like what your doing.” ~ Joel Long

Joel helps get the news out about The World-Herald sponsored events such as The Midwest Spelling Bee, College World Series, and the metro’s largest annual 4th of July show. He personally leads tours at the Omaha World-Herald John Gottschalk Freedom Center, and takes all age groups from school field trips to retirement home outings. While on the tour you learn about the history of how they became the 10th largest newspaper in the United States, print up to 75,000 newspapers per hour, provide staff 23 hours out of the 24 hours in a day, run 365 days in a year and haven't missed an edition since 1885!

Joel makes an impact in peoples lives through the small gestures as well as the large ones. He is in charge of the Omaha World-Herald’s charitable involvement called Goodfellows, which assists more than 2,700 families, providing more than $565,000 in emergency aid and 1,200 grocery vouchers for holiday meals for families in need. The Goodfellows program first came about when the generosity of readers helped area farmers overcome bad crops and widespread unemployment. Since the1890s, the newspaper has used its platform to stir public opinion and build support for a charity or an issue. With The World-Herald paying all administrative costs, every dollar donated to Goodfellows goes directly to those in need.

My appreciation for my time with Joel is beyond words. His big-hearted personality and inclusiveness can be seen in all aspects of his life. I learned the importance of discovering work that best fits you as a person. It is not about the money or title but whether you feel your work is meaningful. Joel was able to find the job that matches his strengths in a way that fills him with excitement that overflows to others around him. This is where he makes the greatest impact.

“Follow your passion regardless of what the money is.” ~ Joel Long

“Love what you do versus I love my paycheck but hate what I do.” ~ Joel Long

“Don’t rule out a job opportunity just because it doesn’t seem like a logical choice.”~ Joel Long

“Find the thing that trips your trigger. Then go do it.” ~ Joel Long

“Don’t be afraid to try something different. It’s tougher when you have more responsibilities.” ~ Joel Long